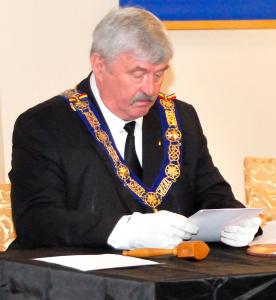 This website is an attempt to present objectively the historical facts in order to prove that Freemasonry is a progressive and socially indispensable institution. Our goal is to overcome the existed prejudices in our own masonic way, using our masonic principles and agreements. The scientific and professional approach provided here, give us hope that Freemasonry soon will become more acceptable by non-masons and it will be given the opportunity to take its deserved place as a serious institution, which activities are important for entire society. Through a comprehensive view over the work and life of the well-known people by Moldovan and world history, this website proves once again the role of the Masons in looking of a more human and tolerant world.

The Freemasonry is existing around us more than three hundred years. During this period of existence of Freemasonry, some states appeared and some disappeared; many dynasties were changed; the governors, regimes, social systems – appeared, lived and then died. Only the Freemasonry survived keeping its originality till today. The Masons over the world use the same rites and the same symbols, understand each other despite the language they speak and God they pray or any other political preferences, despite the color of the skin, despite the ethnicity or level of education. All are at the same level.

Many people tried in vain to compare the freemasonry with religious sects; they say that this was an another attempt to create a counterweight to religion, or insinuate that it is a very strong power which rules the world behind the scenes. The Freemasonry is not a sect, is not a religion and is not a political organization. The Freemasonry is a WAY OF LIFE.

The supreme duty of each brother is to cultivate tolerance, human love, and the humanity for illumination of the around environment, in order to make everyone to see the beneficial effects of the Freemasonry. The effect of this illumination was spread from the very beginning and will continue its spreading for eternity.

Freemasonry is not a secret society. It is a society with a secret. And as Grand Master of Grand Lodge of Moldova, I want to share this small secret:

The goal of Freemasonry is to change people on the background of the humanity!

This burden is on the shoulders of simple human beings, with their advantages and disadvantages, which also is telling us that yet there is a long way that we must go through…