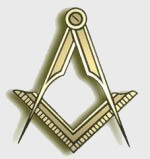 They are the basic symbols of masonry, necessary for the building of stable and just edifices. By analogy, they become symbols of virtue and consciousness that lead to the perfecting of the spirit. In this key can be identified in Square Morality and Compass Spirituality. In other terms, Square symbolizes the sincerity and justice of intent, decision, and work, that is, an obligation, an immutable norm, a must, while Compass signifies determination, ability, genius. In the degree of apprentice, the first symbol controls the second, while in the second degree, the two symbols are balanced and in the third the compass controls the square. Thus, in degrees, the relations between the two powers are significant. 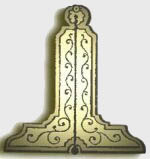 A plumb bob is the element of inner balance and suggests the idea of stable, linear elevation, drawing an infinite vertical line that leads to perfection. It alludes to the search for the transcendent but also to the elevation, which is indispensable to a building that is elevated to a higher dimension. The livella instrument, the instrument used to establish the perpendicularity of the relationship between the horizontal and the vertical, signifies the ability to build a reference system and thus to enrich itself spiritually, while by other means it symbolizes the common destiny of death. 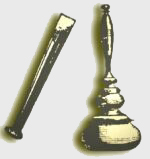 Hammer is the force of will, the determination of iron to succeed for good. Delta symbolizes Discernment, that is, the ability to distinguish the useful parts of the stone, essential for construction, from the unnecessary. Combining willpower with ability to discern leads to the gradual improvement of the work. Thus, while Hammer expresses the will to obtain, Delta symbolizes the consciousness of what must be avoided. At the last analysis, the two instruments signify the need to unite action with thought. 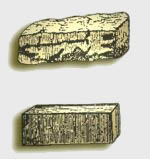 In general the metaphor of the stone is related to its identification with the Mason itself; the Masonic work of measuring and polishing the rough stone corresponds to its transformation itself, which the Mason makes to pass from the profane, unconscious and passive stage to the regular, creative and conscious state of the free freemason. Just as rough stone is not suitable for building a cathedral because it causes instability and disharmony, so the cubic stone, regular and polished, resembles its uniqueness with other stones worked the same and contributes to the rise of the Temple. This correlation implies, therefore, that a mason can work for the good and progress of the country and of humanity, perfecting himself at the same time. 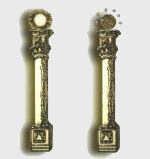 Situated at the Temple entrance to the West, in memory of those which Hiram placed at the entrance to Solomon’s Temple, symbolizes duality. The one with three pomegranates refers to the female element, to the Air, the breath that feeds life, the feminine sensitivity, the Mercury of the Wise Men; The other, which sustains the Globe, the masculine, the Fire, the vital warmth devouring, the activity, the Sickness of the Alchemists. From the duplicity of the column symbol, the dichotomy between the vertical and horizontal, between the terrestrial and the air values, the quest for opposites and complementary principles is born. From a historical point of view, apart from the architectural significance, the “column” has the connotations of height, strength, tension, robustness and structure. Jachin is therefore the Force, and Boaz is, traditionally, the name of David’s grandfather, the royal pillar, the one who symbolized, during Solomon’s time, the concept of Mishpat, justice. The column also means perpendicularity, stability, balance, controlled play of dynamics between up and down, energy transmission channel between the top and the bottom. Jachin, the first sacerdot of the Temple of Solomon, gave his own name to the column that symbolized the principle of fairness, of justice, inspired by the ancient solar cult of the Canaanites, who saw the Light-God who watched the world from the heights. The uncontrollable pact, the foundation of the relationship with divinity, the stability symbolized by the twin columns completes the role of the foundation of the inner edifice that the mason must design and realize. 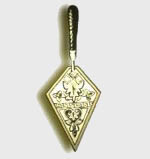 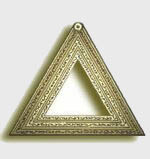 Called Solomon’s Triangle, the equilateral triangle took its name by the capital letter of the fourth letter of the Greek alphabet. The geometric representation of the three (the principle of triplicity is extremely important in the symbolism of the constructors), in the Pythagorean tradition signifies the ascetic multiplication to One, the Christian – the trinity and many other philosophies – the divinity as perfection. In the Temple, the Light Delta is placed in the East and has in the center either the letter G, which is given multiple interpretations (God, Knowledge – Gnosis, Geometry, Genesis), either the Hebrew tetragram or the Pythagorean scheme or the divine eye – the symbol of the creative principle, or the sun – the luminous principle of life.

The Sun and the Moon 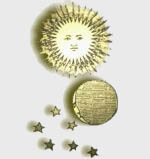 The Sun is associated with a series of symbolic valences, including the axial dynamics, the Sun-Spirit-Fire correspondence, that of warmth and truth, purification, bravery (the Sun is associated in many ancient traditions with the Hero, which descends into every evening in the realm of the dead and emerging victorious every morning), the guide of the human heart. In the broader sense, the Sun identifies itself with the Masculine, with the active principle, being therefore the symbol of Origin, Beginning, reason that illuminates the darkness and illuminates the spirits. The moon symbolizes instead the Feminine, the obscure, the intuition, the changing nature of the forms. Its character is feminine, and thus embody the maternal care that is manifested in its increasing or decreasing nature, the regression of nature’s invasions. But it also signifies the deprivation of the man who has lost his primordial dignity. It also represents the mediator’s image between the celestial forces, because it reflects the sunlight and is the lady of the Waters. In the Masonic sense, the Sun and the Moon represent alternation and balance between day and night, between black and white, between activity and rest, dialectics of opposites. 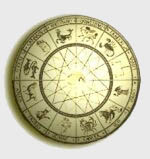 After the Greek etymologist “circle with animal figures” was, according to the Platonic definition, “the image of heaven”. In the Masonry, the zodiac is used as a symbolic system and does not have a divine or astrological character, but rather it depicts a cosmological view of the universe. The zodiac signs are represented along the upper part of the Temple, meaning the polymorphic variety of the cosmos that condenses in the Earth’s synthesis. Each group of signs, according to the ternary and quaternary geometry (each element of fire, earth, air and water, regroups three signs, representing seven planets – three plus four), which in turn symbolizes the three degrees of the Order. 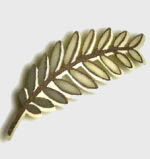 It is certainly the most important of the vegetable symbols of masonry, referring to the principle of immortality of Master. The origin of this symbol is related to the myth of Hiram, the architect of the Temple of Solomon in Jerusalem. After his death, his killers concealed the body in the ground, but an acacia thread emerged at the site where he was buried, which symbolized his presence, symbolizing at the same time the rebirth of a new life. Among the many etymologies attributed to the term, that of the Greek “a-kakon” refers to the absence of evil, to innocence. After the Bible, the Union Ark was made of gilded acacia wood; sacred for Egyptians and Arabs, Acacia is the symbol of hope and soul existence beyond physical death and the preservation of the indestructible energy of life. 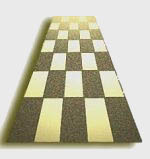 The mosaic – the white and black tile pavement in the center of the Temple is the symbol of the binary, the opposition between one entity and another, between spirit and matter, between truth and false, between good and evil, between beauty and ugly, suggesting at the same time and the dynamics of the composition between the counterparts. It does not allude to division, but to the dialectics of the contradictions from which reality is formed: so self-consciousness and ability to report are born, because you do not exist without accepting the other. In other words, one cannot reach the Truth if the False is not questioned, one cannot now the Good if it does not penetrate the territory of the Bad, he does not get the Beauty until the Ugliness is defined. Only the consciousness that the chessboard has not only the white squares or only the black squares produces the harmonic effect of the understanding, the correctness, the artistic creation. The mosaic is therefore a threat: there is never a single aspect of the possibility of improvement. 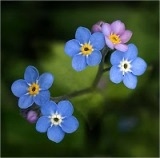 Flowers “forget-me-not” or Myosotis name given in Greek meaning “mouse ear” is a genus of plants in the family Boraginaceae (herbaceous plants covered by stiff hairs) .Henric IV adopted the flower “Forget-me-not” as a symbol during her exile in 1398. The symbol of this flower was first used in Freemasonry by the Grand Lodge of Zur Sonne (Bayreuth) in 1926 as the emblem of the Bremen Convent. After the Second World War, the flower was used again at the first Annual Convention of 1948 of the United Grand Lodge of Germany. Now it is the symbol of all those who suffered in the name of Freemasonry, especially during the Nazi period. Like the Phoenix bird, Masonry rose from the ashes of Nazi Germany as a tribute to man’s courage and the sustainability of true values. “Blue Flower” is also the metaphor – symbol of the eponymous title of a poem of Mihai Eminescu. 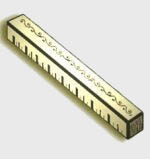 The emblem of perfection and order resulting from just and balanced action is from ancient times the tool of comparison of the size and the measurement of proportional harmony. Quoted in the Bible, it was even the instrument with which the Egyptian divinity Ptah measures the growth of the waters of the Nile and signifies the norm. Whatever the scale used, there is a need to confront the work with some stable parameters. It is also the symbol of the 24 hours of the day, the part of which should be devoted to thought, work, rest, and another part to those who need help.