Freemasonry is compared to an old acacia with several roots (movements, societies, guilds or more or less esoteric orders from which it has inherited ideas, rituals and symbols) and several branches (obedience and rituals today). Many legends, some of them are hostile, circulate about the origins of Masonry: some involve the priests of ancient Egypt, other Pythagoreans, others the Templar Knights. Freemasons themselves think different in this regard. What is certain, according to the historian mason Albert Mackey is that Freemasonry in its present form appeared in the UK in the 18th century. According to the historians of D. G. R. Serbanescu and Jacques Pierre, masonry appeared in the Romanian lands in the middle of the 18th century and developed rapidly at the beginning of the next century.

Today the main symbols of Masonry are the three great lights: the square, the compass and the volume of the Sacred Law and the letter “G” written inside a square and a compass, which actually represents the word “God”, “geometry, generation, genius, gnosis”… Albert Mackey believed that Masons were taught that “Masonry and geometry are synonyms” and that “the geometries found in the modern freemasonry rituals can be considered the remnants of the secret geometries known by the Medieval Masons who are now considered lost”.

Christopher Knight and Robert Lomas gave an interesting interpretation of the well-known Masonic symbols of the square and the compass. They argued that they appeared as a stylized form of the old symbol for the royal power – a pyramid whose base was the terrestrial power, upon which was engraved a reversed pyramid, representing the heavenly power of the priest. These power pyramids unite to create a symbol that will become known as the “Star of David”. According to the two authors, the symbol was used for the first time on a large scale when it appeared on the frontispiece of a large number of medieval churches and the earliest examples of its use on the buildings raised by the Templar Knights. Its usage in synagogues came much later.

One of the Masonic traditions claimed that Abraham, the patriarch of the Jews, gave the Egyptian special teachings before the flood. Later the teachings (which were said to have been the work of the legendary Hermes Trismegistus) were collected in a volume by the philosopher Euclid. He studied them under the name “geometry”. Initially the Greeks, then the Romans, called this discipline “architecture”.

The Masonic legends place the formation of the organization in the age of the Tower of Babel and the building of the Temple in Jerusalem by King Solomon which is mentioned in the Bible. Also, according to Mircea Eliade “history begins in Sumer”. Practically the beginnings of operative masonry are the beginnings of urban culture, the construction of the first cities – fortresses. However, from the point of view of human prehistory, man has always been a stonecutter. Cindy the art of stone carving was combined with geometry – the architecture appeared. The First Great Masters were – Architects.

Masons of the medieval age had taken on both their construction knowledge and the organizational model from the “architects of Lombardy”. This guild in northern Italy was the first of whose members assumed the name of the “Freemasons”, which became the abbreviation for the “Fraternal Order of Carpenters in the Free Stone and Recognized as such”. The phrase “recognized as such” was used in the case of members who later entered the order and had no connection with its founders, the stonecutters in the stone. An alchemical work expressly mentioning the term “freemason” can be dated in the fifties of the fifteenth century. Other Masonic scholars argue that the appearance of the order can be historically dated during the ancient Rome, contemporary with “fabrorum college” (college of workers) – a group of builders and architects became a prototype for the subsequent organization of the guilds. Most writers place the appearance of Masonic secrets in the era of war priests, heroes of the Crusades, “Templar Knights”. An 18th century writer argued that modern Freemasonry was founded by Godefroy de Bouillon, the leader of the first crusade, who conquered Jerusalem and is said to be the founder of the mysterious “Priory of Sion”. Secrets of the origin of Freemasonry were kept aloof, despite the publication of many books and articles on this subject. Walter Leslie Vilmshurst, a distinguished mason and author of The Meaning of Masonry wrote: “The true history of the emergence of masonry has not been made public either by the organization itself”. At the time when four London lodges formed a “Grand Lodge” in 1717, speculative freemasonry had come to dominate the founders of this organization – the masonry or “the Masonic workers”. Freemasonry has acquired esoteric knowledge, especially from speculative masonry, philosophers, alchemists, heretics, or Rosicrucians. The origins of Freemasonry cannot be identified from any safe source, but the order emerged from a combination of traditions that have evolved and merged over a longer period of time.

Freemasonry continued to widen its ranks, and in 1720 Masonic lodges were established in France, under the auspices of the United Grand Lodge of England. They formed in 1735 a Grand Lodge in Paris. The Grand Lodge was different from the Scottish lodges that had been formed after Carol I Stuart had fled from England. The tensions between the two branches of French masonry increased in 1746, with the exile in England of Carol Eduard, named “Dear prince Charlie” or “the young contender”, and his supporters who encouraged the use of the order for purposes political.

In that era, the true public origin of Freemasonry became known to the great public. In 1737, the professor of the Prince’s sons, Carol Eduard, who was a member of the Royal Society, Andrew Michael Ramsey, spoke in front of the Freemasons in Paris, the discourse called “Ramsey’s Speech”, stating: “Our Order formed a union not to share with the Knights of St. John of Jerusalem” – order very close to that of the Templar Knights. Ramsey also said that Freemasonry was linked to the ancient schools of mysteries, patronized by the Greek goddess Artemis and the Egyptian Isis. 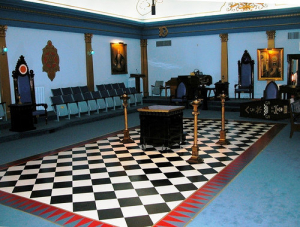 The German Mason, Karl Gotthelf, Baron von Hund became a member of the Frankfurt palace and in 1751 founded a Scottish rite branch called the “Order of Strict Observation”; after the oath that provided unconditional obedience to the orders of mysterious and “unseen” superiors, as described throughout the volume, the order ended with the merger between the Order of the Illuminati and German Freemasonry during the Wilhelmsbad congress. Hund acknowledged that he continued to carry on the traditions of the Templar Knights, who were constrained at the beginning of the fourteenth century by the regime of Philip the Fair, the King of France, to self-exile in Scotland. The members of this order proclaim themselves “Knights of the Temple”. He claimed to transpose the orders of “unknown superiors” whose identity and place of residence were never specified, while others claimed that these “superiors” were not people. Most researchers believe that they were probably the Stuart’s jacobitism supporters who died or lost faith after defeating the young contender at the throne.